Aleksander Aamodt KILDE (NOR) went from flu to first this weekend at the Xfinity Birds of Prey Audi FIS Ski World Cup.

KILDE, who posted on social media that he wasn’t feeling well but that it was… “OK, it’s just the flu,” became only the third racer to win back-to-back downhills at Xfinity Birds of Prey with a winning time of 1 minute, 42.09 seconds at today’s race.

“It’s been a tough week … but [the illness] really hit me hard,” KILDE said. “I already feel way better today than I did yesterday… I’m still feeling it a little bit of it in my system but I got the possibility to be ready for the two minutes that I needed.” 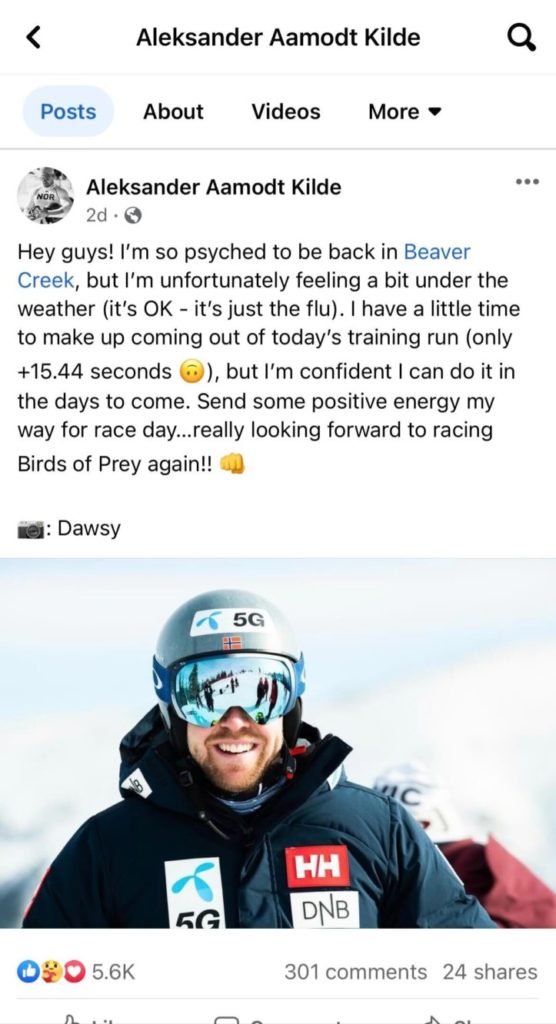 The Canadian team, which had quality results throughout training, showed well again today with James CRAWFORD (CAN) taking third with a time of 1:42.88 (+.72).

Olympic super G silver medalist Ryan COCHRAN-SIEGLE (USA) was seventh with a time of 1:43.15 (+1.06). Bryce BENNETT (USA) and Travis GANONG (USA) also scored in 26th and 27th place. Sam MORSE (USA), who is coming back from a devastating leg injury, was 31st, just outside the points by .02s. Steven NYMAN (USA) struck a gate with his right shoulder, was knocked back, and skied off course in the bottom third. NYMAN skied through the finish but appeared shaken by the gate collision.

KILDE’s chance to win yet another downhill this Friday, Dec. 3, was not to be. The race was cancelled due to heavy snow. Official snowfall totals at Beaver Creek were reported as 9 inches, but course workers showed pictures of 12-to-15 inches on portions of the course.

Course personnel worked through the night to prepare for today’s race, creating quality track conditions despite periods of flat light and gusty winds. The athletes reported to officials that they were, “amazed,” how well the track skied given the conditions over the past 24 hours.

With today’s result, Norway has edged out Austria as the winningest nation on the Xfinity Birds of Prey downhill piste. Norway has won seven compared to Austria’s six. The United States has won five (Daron RAHLVES two, Bode MILLER three).

Looking ahead to tomorrow’s super G, KILDE said he knows there is tough competition that will make another victory difficult.

“Marco ODERMATT for sure, he can be one of them to stop me,” KILDE said. “There are also a lot of contenders. It’s not easy to win ski races.”